This week's theme for The Gallery is 'animals'. Tara wants us to think outside of the box for this one so here's my attempt...

This isn't actually the first photo I thought of.  I have hundreds, if not thousands of photos of animals.  Most are average but there are a few that I am especially proud of, yet I found it difficult to pick a photo for this post.  I wanted to pick a photo that meant something to me and so I found myself being absorbed into my memories, reliving the moments and spending a fair bit of time staring at my computer screen and smiling.

Eventually I decided upon the photo below.  It was taken on a trip to South Africa with my now husband.  It was our first holiday together, six years ago.  I had never been anywhere like that before and the trip was just magical.  We spent 10 days moving around the Cape Town area and just had a blast.  On one of the days, we took a horseback safari and that's when I took this photo.  It's not technically brilliant but it does bring a smile to my face.  Shortly after (or maybe before?) this was taken, F had been attempting to get some close-up shots.  He actually did a very good job but at the expense of a lens - an osterich lunged at his camera and left the lens with a nice scratch.  A dangerous moment but it has me in fits every time I think about it! 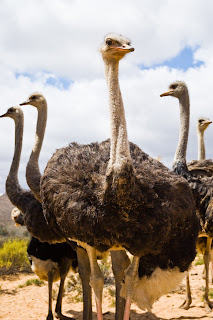 Head over to Sticky Fingers to see all the other animal posts.
Posted by Rachelle at 10:57