Yesterday was family day and so we decided to visit the zoo. We're quite lucky because where we live is within easy driving distance of several zoos but we chose to go to Whipsnade Zoo. This would be Elizabeth's first time seeing most of these animals but let's face it - this trip was for us parents!

The zoo is very easy to get to, there's plenty of parking and the weather was looking good. We've had some really hot days this past week here in the UK but yesterday was slightly cooler. We were both a little disappointed about the entrance cost to the zoo but we had such a wonderful day that I guess it didn't matter that much.

The highlight of the day for me was seeing the bird display. They are such amazing animals! They were flying so close to the crowds that you could easily touch some of them. We then headed over to see the elephant display which was equally as impressive. Elizabeth of course slept through both shows - not that she would appreciate them anyway just yet - and she slept for 2 hours in her buggy! She fell asleep shortly after her lunch, which she took her time eating as there was just too much going on in the restaurant. She's such a nosey parker and apparently she gets that from me. Now I'm going to blame my genes for that one as I definitely get that trait from my two nans. 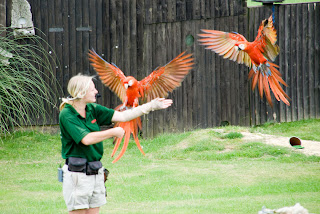 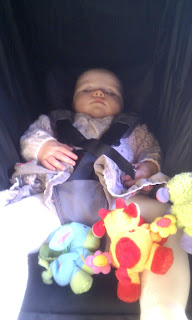 We only got to see about a third of the zoo but I actually had as much enjoyment seeing Frans and Elizabeth together. E spent a great deal of her (awake) time on Daddy's shoulders which meant she could grab handfuls of hair and pull :) If I have to put up with that, F can handle it for 5 minutes, I'm sure. There was also E's first taste of ice cream to mention but I'm not really sure she knew what to make of it! 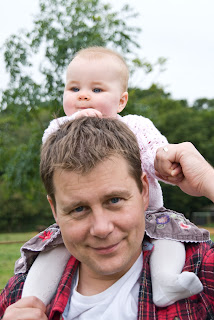 All in all we had a wonderful day, topped off with the 7th Harry Potter film over dinner. Perfect!
Posted by Rachelle at 20:53