Well today we had the first scan of the baby. It's currently 12 weeks and 6 days old. It's about 6.5 cm long and likes to stretch and kick its legs lots. 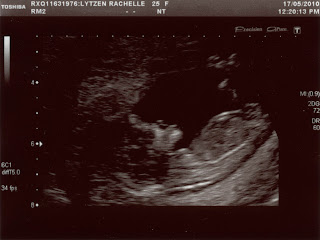 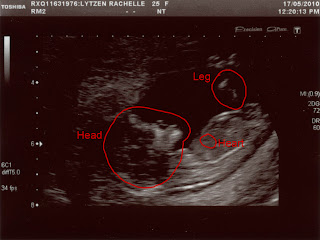 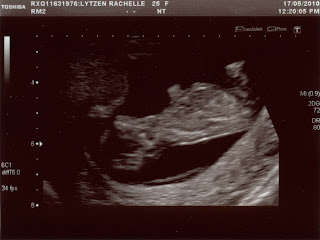 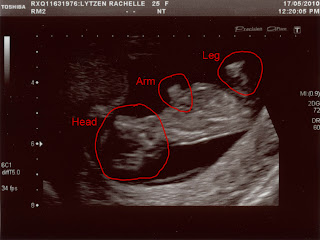 Posted by Rachelle at 22:58 No comments:

Well we're now back from our little weekend trip away. We had a great time but as expected, the weather could've been better. I'm very happy to report though that 'Knold' seemed to enjoy itself :) I've only had a couple of moments where I've felt sick and now we're back and I'm still feeling good. How long will it last I wonder.....
Posted by Rachelle at 03:12 No comments:

Frans has been on at me to write a little something on here so I thought I'd give you a little update on how I've been feeling.

Everyone tells me that the morning sickness should be easing up about now - we're at the twelve week pitstop - but my morning sickness has turned into all-day sickness and I actually feel worse now than I did 5/6 weeks ago. Not a lot I can do about that, I know, but I like to complain :) I've found it difficult to do even the most basic chores around the flat as everything seems to make me want to vomit, which isn't pleasant. Almost all exercise has been stopped for now as well, as physical exertion brings on that dreaded sicky feeling. I'm looking forward to our walk up Snowdon this weekend though. Gonna take it easy and fingers crossed the 'morning' sickness doesn't wreak havoc.

I had my first antenatal blood test today. I can't believe how much blood they took! Glad it's done and I don't have another one until about the 28-week mark.

Frans makes me laugh. I'm so happy I married him :) I'm sure you know what he's like when it comes to something he's excited about. He has printed a pregnancy calendar - it took him three attempts - but it's now up on the wall and he's started writing little bits on it. He gets so excited about everything. We read in a book a friend had lent us that the baby is moving now but is too small for me to feel it. However, a doctor can hear the baby through a stethoscope. We don't have one of those but Frans thought a glass placed upside-down on my belly might work just as well. Needless to say it didn't, but it gave me and baby a good chuckle :) I think he now wants to buy a stethoscope....

He also wanted to buy some books but I said no, not until we were a bit further into the pregnancy. Well, once I gave him the go ahead he went off and researched all the different books he could buy and bought one - that was all I said he could have otherwise he'd buy them all. After our first scan I'll let him lose with the credit card.

There's lots of other stuff I could bore you with but I'll save that for another day.