So yesterday was a big day for a few reasons. I was exhibiting at a wedding fair so that meant me leaving Elizabeth for most of the day. It doesn't stop there. Frans did the exhibition with me so Elizabeth had to be left with someone else. Wow! My Mum, Tim and Emma looked after Elizabeth whilst we worked - big thing for them - but everything worked out fine. 'Of Course it did!' I hear you cry. Elizabeth seems to have had a blast and all us adults are still in one piece. Mum needs to practice putting nappies on though...
Published with Blogger-droid v1.6.7
Posted by Rachelle at 22:44 No comments:

Elizabeth does some of the cutest things with her hands whilst I'm feeding her...

Published with Blogger-droid v1.6.7
Posted by Rachelle at 09:26 No comments:

We decided a while ago that we wanted to try dream feeding Elizabeth. This is literally feeding her whilst she is still sleeping. We've been told this is easier to do with a bottle so we set about adapting the night time routine that we already had in place. Two weeks ago we were starting the routine at 9pm, giving her a wash then a bottle, then straight to bed. We now start at about 7pm.

Initially we tried doing the dream feed at about 11pm using a bottle. This worked really well on the first night but the next two were a bit disastrous. We decided to then try the dream feed on the boob before abandoning anything. That small change seemed to work really well so we did the same again last night. She quite happily fed in her sleep.

We'll continue with the dream feed for now and see how it goes.
Published with Blogger-droid v1.6.7
Posted by Rachelle at 08:54 No comments:

What a nightmare! Who'd have thought that socks could cause so many problems? Luckily, when we put Elizabeth in a (very cute!) outfit, it's usually a dress so she'll wear tights. However, we do have some lovely outfits which require her to wear socks. But socks just don't want to stay on her feet! I asked my new mummy friends how they keep socks on their baby's feet and one friend recommended 'sock-ons'. They're amazing! You put them over the socks and they really don't come off. They're not too tight either so Elizabeth is more than happy to wear them. I'm one happy mummy :) 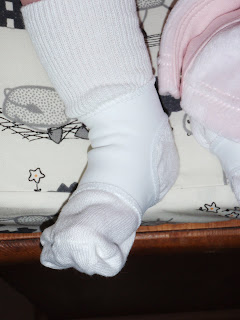 Posted by Rachelle at 11:37 No comments:

Yesterday we took Elizabeth for her first swimming lesson. Frans did the class with her and she seemed to be ok in the pool. She did cry when the instructor dunked her under the water but I didn't expect anything different :) There was quite a lot going on which surprised me but it was lovely to watch Elizabeth 'swimming'. 8 more classes to go...
Published with Blogger-droid v1.6.7
Posted by Rachelle at 23:27 No comments:

Our daughter gave me some wonderful smiles when she realised it was me that had come over to see her. It's the best feeling in the world.
Published with Blogger-droid v1.6.7
Posted by Rachelle at 15:01 No comments:

With us going to France at the end of March on our first family holiday, I knew I had to get a wriggle on and apply for our little girl's first passport. So about three weeks ago I attempted to take a photo of Elizabeth that I could crop and print myself. Definitely easier said than done. Whilst the rules for baby photos aren't very strict, they do have to be a certain size as well as meeting some other rules. I faffed for a while before deciding it was easier and less risky to get someone else to do it.

Paspic.com had been recommended to me. They take your photo and make it passport-rule compliant, sending you 4 prints a few days later. Well, for what ever reason, they're website wouldn't accept my photo so I had to do it myself anyway. I spent ages getting Elizabeth's photo just right. I was convinced that something would be wrong with it and it would be rejected but her passport is proof that I did a good job :)

And I'm very impressed with the speed of the passport service. With a first passport it can take up to 6 weeks to be sent to you - Elizabeth's took exactly 2.

We have some exciting times ahead!
Published with Blogger-droid v1.6.7
Posted by Rachelle at 15:38 No comments:

Someone has been having fun with her toys this morning...
Published with Blogger-droid v1.6.7
Posted by Rachelle at 09:13 No comments:

Oh how we love injections!!

Elizabeth had her first set of immunisations yesterday. She was very good and only cried a little bit when the nurse jabbed her. She went for a nice long walk when she got home and was pretty calm and even fell asleep. Then she woke up. She cried so hard for about two hours, didn't want to feed and didn't want to sleep. Eventually she exhausted herself and managed to have a little bit of milk before having a snooze. She didn't sleep much though and kept waking up. She really wasn't interested in anything and was quite subdued. Frans then gave her a bath. She really loves the water and this perked her up a bit. She had a bottle (part of her night-time routine) and went to bed. She then slept for 8 hours! Wonderful! I fear the immunisations may have had a big part to play in that marathon sleep though :(
Posted by Rachelle at 21:45 No comments: