I mentioned in a post a little while ago that E has a boyfriend. I'm fairly certain that we're not supposed to have boyfriend issues until E is much older. I'm hoping for the age of 21 but it's probably more like 14.

Anyway, a little while ago E learnt how to kiss. It's not a particularly pretty kiss and she doesn't really do it when you ask but it's very clear what she's doing. She usually reaches out and grabs her victim with both hands and yanks them towards her.  She'll either have her tongue hanging out or have her mouth open and stick her lower jaw forward a little.  It's kind of hard to explain.  So we were out at lunch with some good friends of ours, Ali and Rob and their son Alexander.  Alexander is about 2 weeks older than Elizabeth.  They just couldn't keep their hands off each other! 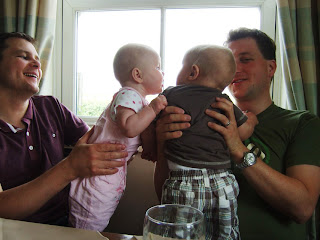 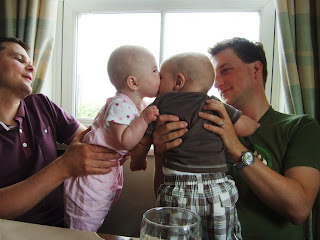