So straight from our trip to Sweden, we went down to the summerhouse in Nysted, Denmark to visit Inger (Farmor - Grandma for those English readers) and Bruno.  The drive was one we have done many times, only this time I did some of the driving.  Very scary!  I did like driving the Touran though.

We had a pretty chilled first night in Nysted, commencing with a lovely dinner prepared by Inger.  I was exhausted so made my way to bed fairly early but I love that I feel I can do that.

The following day was Monday, our only full day with Inger and Bruno and we had a lazy morning then made our way over to Knuthenborg Safari Park. (Their website does have an English section if you click on the flag at the top but it mainly tells you how to get there and the prices.  For images, stick with the Danish site)  We arrived before lunch and were greeted with goats and donkeys roaming free.  This was a section of the park that was open for us to walk around and interact with the animals so we took the opportunity to get E out of the car.  We were unsure how she would feel about being kept in the car while we drove around trying to spot animals through trees so any breaks we could get were most welcome.  Of course, Elizabeth loved it.  She pretty much ran at the goats but they were a bit faster than her!  We then went over to see the donkeys and they were more than happy to let Elizabeth hug and stroke them.  She was thoroughly enjoying herself and didn't want to head back to the car. 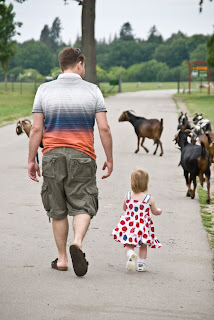 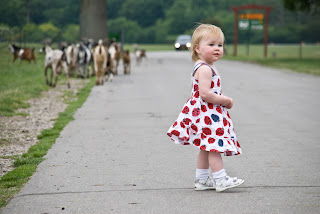 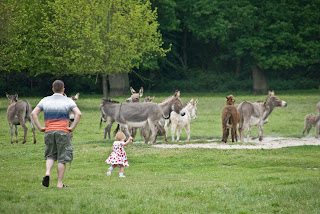 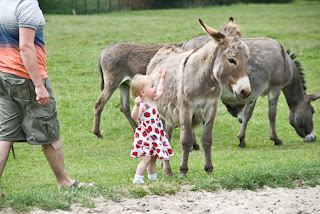 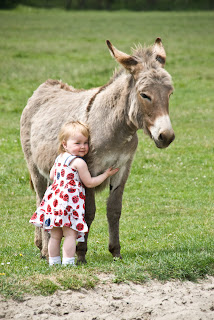 Once back in the car, we went to find the tigers as it was feeding time at their enclosure.  This time Elizabeth was more interested in the other children that were peering through the window at the tiger than the animal itself but it was still interesting to see the tiger so close.  It was then lunchtime for us so we headed off for food and just managed to dodge the rain shower.  I hate rain.

After lunch we drove around the park, visiting various enclosures including the wolves where we got to see one of the cubs.  It was a little fluff ball and so very cute!  We could see the adult wolves at the edge of the enclosure, waiting for food as there was a demonstration going on whilst we were in there.  We continued our journey round the park and went into the tiger enclosure near the end.  We were lucky enough to find one of them laying on the top of a huge tree stump, right by the road!  We were able to get quite close and were then lucky again to see two more round the corner.  Amazing, beautiful animals. 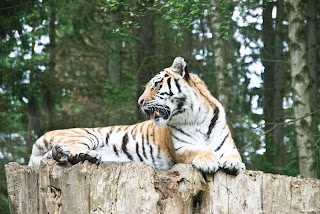 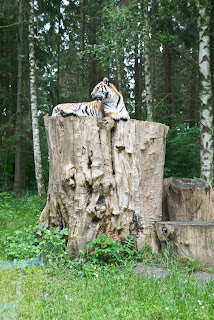 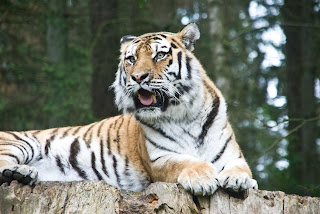 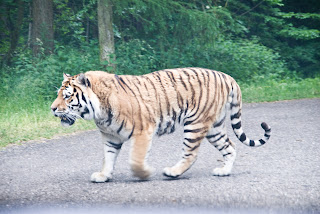 Lastly, we went to see the monkeys.  We were actually stopping for ice cream (in the rain) and had good timing as the bus that takes you through the monkey enclosure was leaving shortly after we arrived.  It was a quick 2 minute trip but E loved it!  We were given some little treats to feed the monkeys and from inside the bus, you can put the food down shoots so the monkeys can pick the food out of trays that line the outside edge.  It was funny watching the monkeys waiting with their hands at the bottom of the shoots, clearly very experienced with this sort of bribery.  Seeing them close up was incredible and I thought E might freak out a little.  She was actually the complete opposite and would probably have joined the monkeys outside given half a chance.

When the time to leave Nysted on the Tuesday came, we took a little walk around the town itself before saying goodbye to Inger (Bruno had already left for work).  We had an easy car journey up to the airport but the airport experience itself could've been better.  I won't bore you with the details but by the time we boarded the plane, we were almost the last passengers on to a very full flight.  Frans and I were going to have to sit apart but thankfully we had a wonderful air steward who politely asked someone to move so that we could sit together.  No only that but we had three seats, making the trip much more bearable as E isn't happy just sitting on our laps the whole time, not any more.  There was a little girl sat in front of us who did a great job of entertaining Elizabeth so a potentially stressful flight turned into a pretty cheery one.

That's our last trip before baby number 2 arrives.  I have a feeling that our next trip abroad may not be so smooth.
Posted by Rachelle at 22:29