For those of you that don't know, Frankie is our dog.  We got him from Stokenchurch Dog Rescue on March 31st and he has quickly become a part of our family - for better or worse.  He is a Collie and we suspect he is crossed with another breed.  He is mainly black and tan but has patches of white on his feet and tummy.  He is roughly a year old and we decided to make his birthday the day we brought him home.

Frankie was originally a stray dog from Ireland.   Over there, if a dog isn't rehomed within 5 days, it gets put down so a lot get shipped over to England to places like Stokenchurch Dog Rescue (SDR) or the Blue Cross.  At some point last year, Frankie (formerly Frank) was rehomed with a different family.  I've heard two different stories but they both end up at the same point - Frankie being caged 24 hours a day.  Someone reported the owners to the police and so Frankie was sent back to SDR.  Whilst the police investigation was underway, Frankie had to stay up at SDR so when we looked at him, he'd been there a couple of months, if not longer.  When we went to look at dogs, it was obviously important for us that whichever dog we chose, would get on well with Elizabeth.  Her and Frankie seemed to get on well and we decided to bring him home with us. We picked him up on March 31st.

Frankie really enjoys the training that we do with him and has picked up some of the commands really quickly.  We are using the clicker method and so when he's doing really well, he ends up having a lot of treats!  We're currently looking into doing some agility training with him as we think he'll really enjoy the challenge.  I've really enjoyed training Frankie and have a feeling that I'll enjoy the classes almost as much as Frankie will.

Elizabeth is very excited to have Frankie around and can often be caught giving him a kiss or cuddle, or encouraging Frankie to give her a kiss back (so lots of licking of her face).  Frankie puts up with a lot from her including the affectionate 'ear pull', 'eye gouge' and 'tail yank'.  These two actually get on so well with each other that they sometimes drive me mad!  They follow each other around and Elizabeth often gets knocked over because Frankie gets so excited that he doesn't realise his bum sticks out behind him.  He'll turn around and his bum knocks Elizabeth over but usually she just gets up and gives Frankie a big hug.  If I separate them to give them each some space (and myself too!), they'll both be found by the gate, often with their hands/paws through the bars. 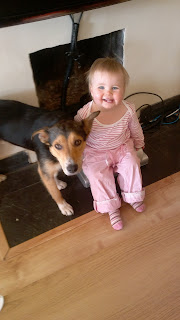 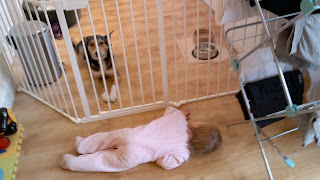 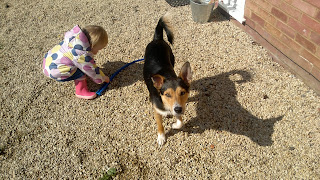 I have no doubt that they'll always be best buddies.


The bad side of Frankie

Frankie has one major flaw and unfortunately it's a bad one.  When we leave him alone in the house, he has a tendency to destroy things.  He doesn't do it every time and there also doesn't seem to be a pattern as to when he will wreck something.  It's usually just a cushion off the sofa - and the same one as well - which we can cope with.  He's also had a go at my handbag but I can't really blame him for that one.  I had left it on the sofa but I think E undid the zip and there was chocolate inside.  I guess it was just too tempting for Frankie!

However, I was almost in tears on Monday when I came home from visiting a friend to find a sea of destruction in the living room.

As you can (perhaps) see from the photos, Frankie didn't just wreck a cushion this time.  He had torn apart a 'thing' that had hundreds, possibly thousands, of tiny white polystyrene balls in it.  That's what looks like snow in the photos - they were a pain to clear up.  He attacked several of E's toys, destroyed a pot plant, chewed up some other bits and generally left a lot of mess for me to clear up.  I was very far from happy.  And the worst part?  He didn't even TOUCH the chew toy that I left for him! 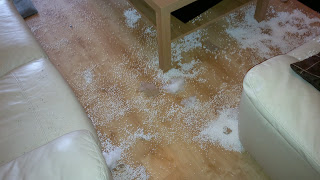 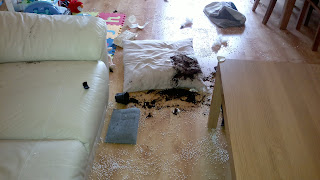 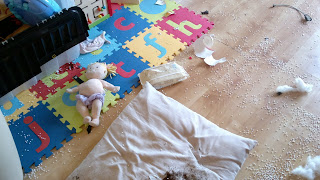 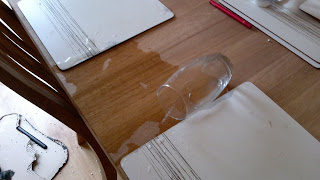 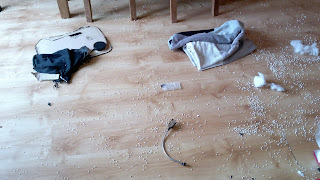 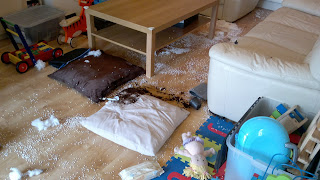 Every time I leave the house, Frankie gets left with a Kong, a chew bone that apparently tastes like chicken, a dog toy, a rawhide chew and some biscuits or a pigs ear for him to eat.  He doesn't behave badly because he's hungry or because he needs to go up the garden.  I thought maybe he needed a longer walk in the mornings but that hasn't solved the problem either.  We're still debating the next step.... 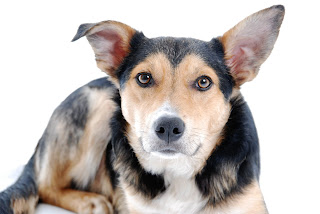 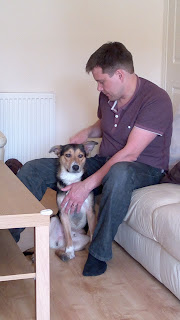 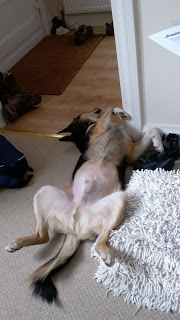 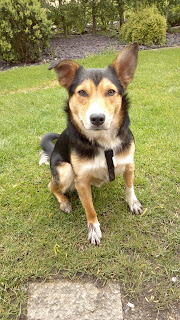 Getting muddy out on a walk