Elizabeth rolled over today from her back to her front. The first time she did it, it took her about 5 minutes. She was determined to get all the way over didn't stop trying. I was so excited!

The second time didn't take quite as long but was still a struggle. She desperately wanted a toy...

The third time was when she was trying to reach me. She flipped over so quickly, you would've thought she'd been doing it for weeks. She then decided I was far too boring and scooted round on her front until she found a toy she wanted which had been by her feet.

A little while later, Elizabeth went down for her nap. I checked in on her 10 minutes later and she was fast asleep. 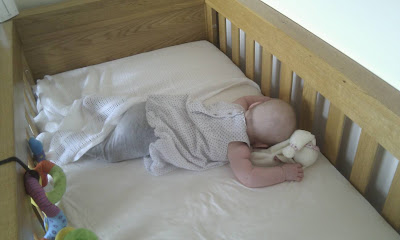